According to Wikipedia: Artificial intelligence AI

"... is a branch of computer science concerned with the automation of intelligent behaviour and machine learning. The term is difficult to define, as there is already a lack of a precise definition of "intelligence". Nevertheless, it is used in research and development

Mostly, artificial intelligence refers to the attempt to emulate certain decision-making structures of humans by, for example, building and programming a computer in such a way that it can process problems relatively independently. ..."

AI is therefore a relatively soft, comprehensive term. That is why it is often used incorrectly or misinterpreted. AI is also often overestimated; AI is not suitable as a solution for every problem.

So what makes AI so intelligent? The magical process of Machine Learnings.

BWith normal programmes, the user directly enters the pattern that the programme should use for its decisions. With artificial intelligence, the machine learning process allows the programme to recognise the pattern itself.

If the same thing were done with AI, the user would provide a dataset of temperatures and their classifications. With this data set, the AI would be trained to determine the temperature ranges in each class itself. So there are no hard-coded thresholds, but learned thresholds based on the data

Within a numerical decision field with varying numbers of layers, the predictive ability of the system is improved in the learning process by continuously updating the values of various constants known as weights and biases, and then testing the predictive abilities with the current constants.

It just a simple picture to basically explain how AI works. Learning principles and methods abound. Also, the learning model can be arbitrarily complex and multi-layered.

What is soventec doing in the field of artificial intelligence?

soventec has been working intensively on the topic of AI for years and is continuously deepening its know-how. The development of the soventec AI platform  AIcebirdTMalso plays a major role in this. Especially in the field of sensor data analysis, soventec has built up a wealth of experience. Building on the classic methods of signal analysis and signal filtering, valuable information can be extracted from the data with the help of AI.

The structure of the data is irrelevant. All data - be it multidimensional sensor data or image data - is traced back to an n-dimensional matrix, which the AI process aims at with the model. A very decisive prerequisite in any AI project is the clear definition of the question:

What information exactly do I want to gain?

Once this is clearly defined, the data can be structured correctly, the model trained and thus information that is not obvious to humans can be read from the raw data. 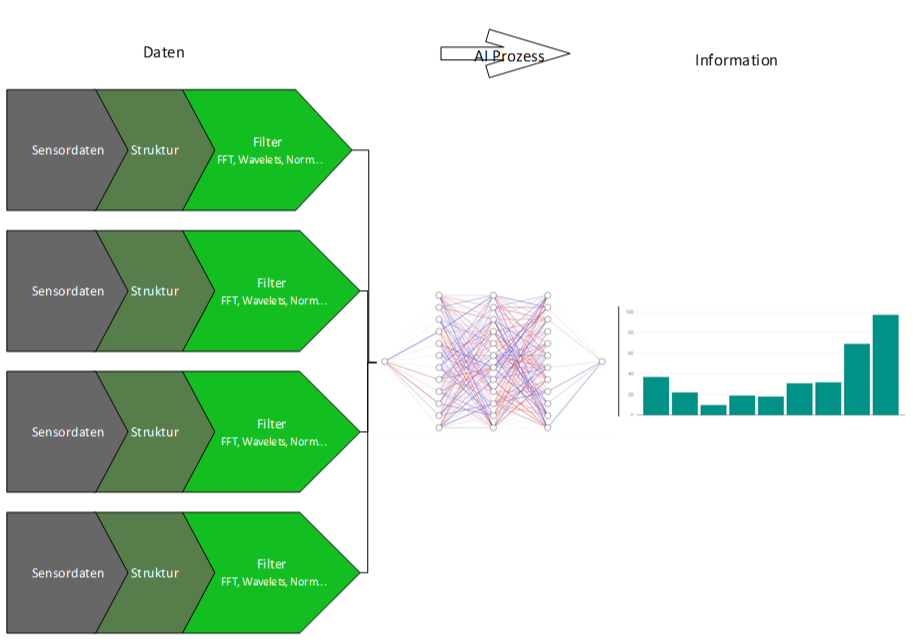 AI approaches are always useful when humans know that the information they are looking for is in the data, but that it cannot be obviously extracted from the data

In atopic dermatitis patients, the body's response to diet and stress or comfort level is not always predictable. The allergic reaction cannot be attributed. On the other hand, this information must be hidden in nutrition and environmental indicators. This is a classic task for an AI system. Two questions were defined that could not be analytically answered medically: 1. which foods together with a well-being or stress level have a decisive influence on the body reaction? 2. how strong will a body reaction be when certain foods are consumed, even in combination?

FFor the implementation, a classical approach via supervised learning was chosen. Over a period of time, subject-specific diet and stress factor were recorded against an assessed body reaction. This resulted in a model that allows predictions of the body reaction with a certain degree of uncertainty. The uncertainty is that perhaps not all factors that affect the disease are taken into account. This can also be subject-specific. The model can be improved by consistently documenting diet and environmental factors.

A classification is to be carried out from medical analysis data sets with approx. 3000 individual parameters per data set. One of the tasks is to classify the data sets into "positive" and "negative".

A simple task at first, but then shows its complexity in detail. The test person listed below (blue) would clearly be "negative" if viewed simply. The trained AI model, however, makes it clear that he shows abnormalities that do not allow him to be classified in the "negative" group. This was confirmed by a subsequent precise assessment of the test person using other methods. A treating doctor might have interpreted this result incorrectly 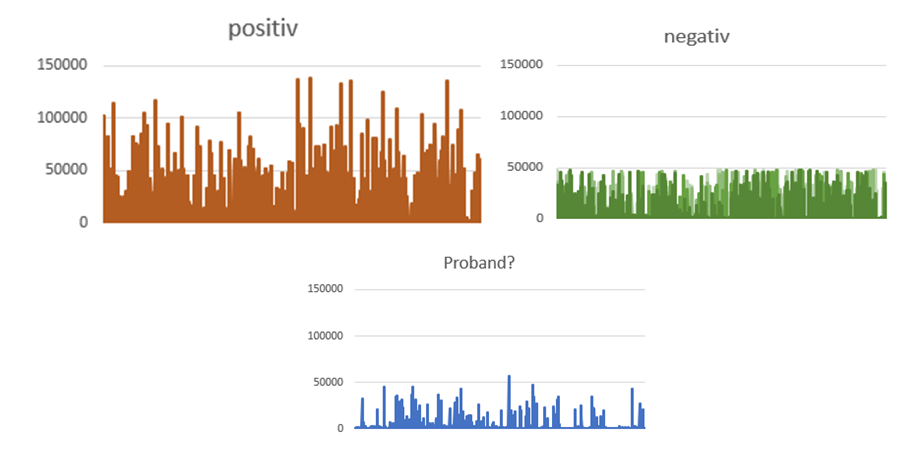 The AI draws attention to the differences. Reasons for the differences can be manifold: Problems in the measurement process or actually a test person with unusual values. But important is:

The AI has recognised the unusual test person

In this example project, AI is already used during the measurement process in a laboratory analysis device in order to detect faulty device situations, to counteract them if necessary and thus to optimise the acquisition quality. Classical statistical and frequency analysis methods (including FFT, wavelets) are also used for signal evaluation. The AI model is developed using the soventec components Lab OS®  as a secure data storage system and AIcebirdTM as 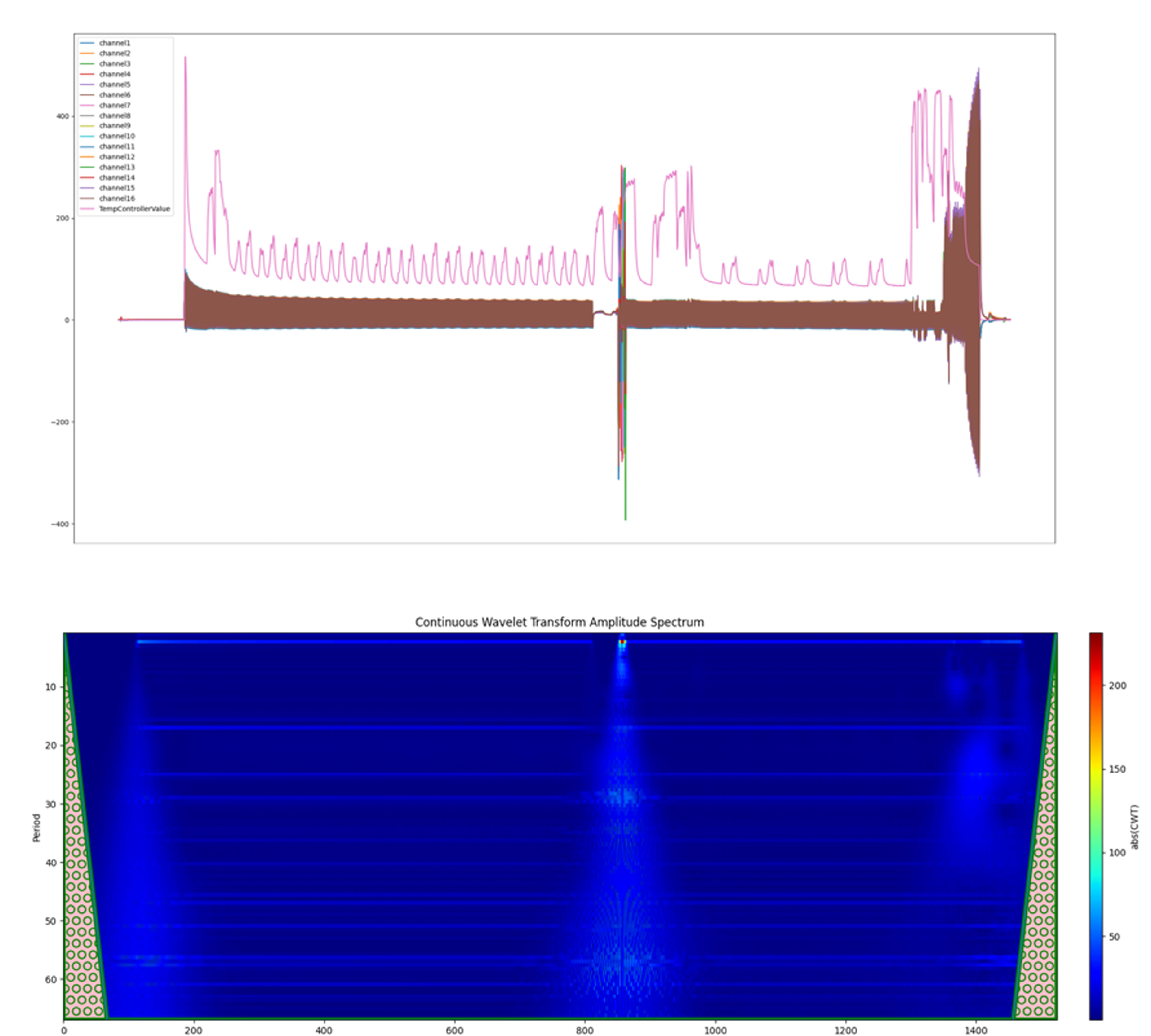 the Python-based data evaluation and learning platform. In most cases, a supervised learning approach is also used here. The trained AI model is fed back into the device and can detect device and process specific situations. The process software in the lab device can readjust or abort based on the knowledge. Both the training and process systems have been implemented by soventec. 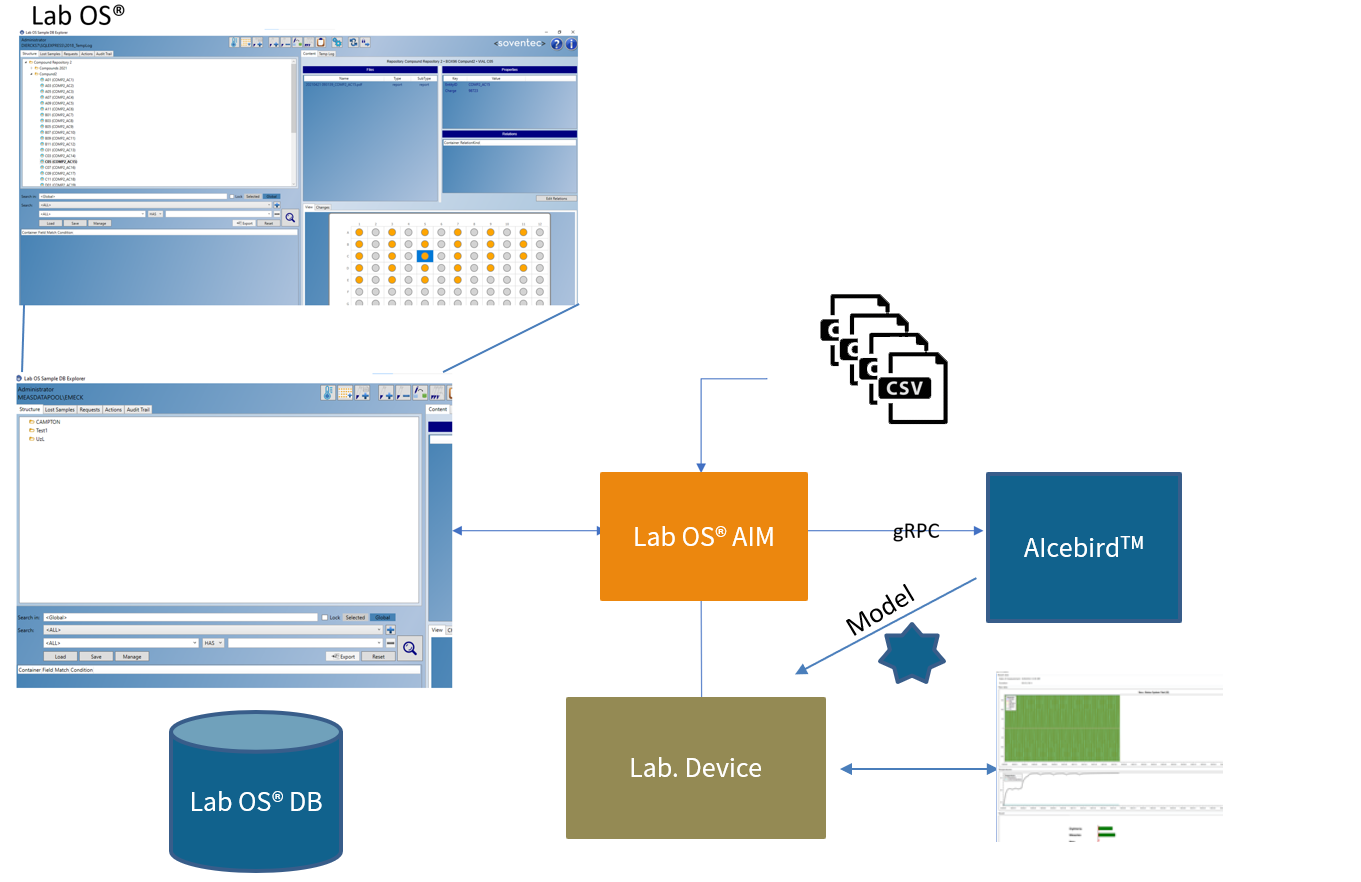 When does it make sense to use AI?

The examples shown are fields of application for AI in scientific and industrial applications. AI can be the method of choice whenever a problem cannot be fully analysed or can only be analysed with disproportionate effort. AI stores knowledge about problems in parameterised networks, which is derived from training data.

The knowledge is not always describable to humans, but nevertheless applicable. This is what makes the AI methodology so valuable and powerful.